MAIDEN VERMONT has created a scholarship fund to support young people with and interest in pursuing higher education in the areas of vocal music and/or choral conducting.  If you, or a student you know, fits the criteria and would like to apply for the $500 scholarship, fill out the application and return it to Maiden Vermont.

The Woman of Worth (WOW) award is given once a year at our annual holiday party in December to the one special woman who distinguishes herself above and beyond the regular outstanding efforts of Maidens.  Each woman who earns this award shares a deep part of herself with Maiden Vermont in not only her words and action, but by the very essence of who she is.  Throughout her award-winning year, the Maiden who achieves the WOW award has worked tirelessly and without complaint to further the efforts of the chorus.

Past recipients of Maiden Vermont's WOW award include: 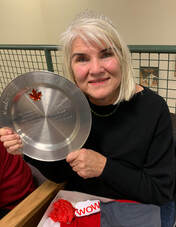